TEHRAN (IQNA) – The Arab League and the government of Syria categorically condemned US Secretary of State Mike Pompeo’s visit to the occupied territories of Palestine in West Bank and the occupied portion of Syria’s Golan Heights, describing it as a clear violation of international law. 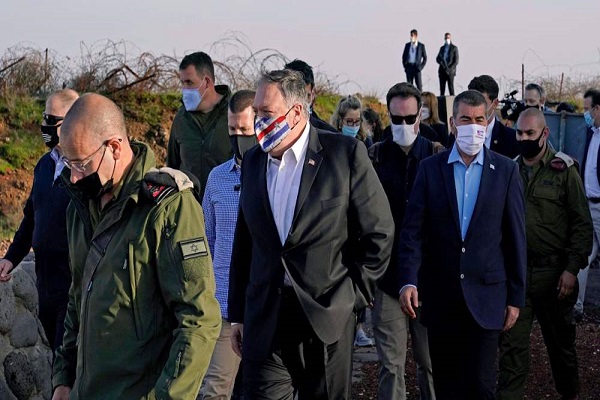 The assertion by the Arab League came on Thursday, after Pompeo became the first US secretary of state to visit the Israeli occupied Golan Heights after an unprecedented stop in the occupied West Bank.

Reacting to Pompeo’s visit, which has also stirred strong opposition and wrath of various Palestinian factions, the Arab League issued a statement saying his trip to the occupied West Bank and the Golan Heights is against the norms of international law.

She went on to say that Pompeo is “trespassing on Palestinian land stolen by Israel” and “has done enough damage”.

Palestinian Prime Minister Mohammed Shtayyeh and the resistance movement of Hamas had already decried the planned visit by Pompeo in the occupied West Bank.

Later on Thursday, the Syrian Ministry of Foreign Affairs and Expatriates strongly condemned Pompeo’s visit to the Israel-occupied Golan Heights.

An unnamed foreign ministry official said Syria condemns in the strongest terms the visit by the Secretary of State of the United States of America, Mike Pompeo, to the Israeli settlements in the occupied Syrian Golan.

The official pointed out that “Pompeo’s visit is a provocative step before the end of the Trump administration’s term and a flagrant violation of the sovereignty of the Syrian Arab Republic.”

The official added that such criminal visits encourage (Israel) to continue its dangerous aggressive approach, which would not have been possible without the unlimited and continuous support provided to it by the American administration.

The foreign ministry official said Syria expects the United Nations and the international community to condemn this visit, which violates UN resolutions, including Security Council Resolution 497, and defies the international outcry in opposition to Israel’s decision to annex the Golan Heights, and the US decision to recognize this annexation.

Pompeo announced in a statement on Thursday that imports from settlements in the occupied West Bank should be labeled products of Israel.

The decision, he said, is yet another biased, pro-Israeli move by President Donald Trump’s administration.

In the news conference with Israeli prime minister Benjamin Netanyahu, Pompeo also said the US will label the Boycott, Divestment, Sanctions (BDS) campaign, which seeks to isolate Israel over its treatment of the Palestinians as “anti-Semitic”.

He said government support for any organizations taking part in BDS will be cut off – a step that could deny funding to Palestinian and international human rights groups.

The Israeli regime, meanwhile, has tasked its ministry of strategic affairs and public diplomacy — a body founded in 2006 that collaborates with Tel Aviv’s interior ministry — to organize campaigns against the BDS movement.

It issued a list back in 2018 consisting of nearly 20 international NGOs whose members would be denied entry into the Israeli-occupied territories. The list also included the UK-based Palestine Solidarity Campaign organization.

The outgoing Trump administration has broken with decades of bipartisan US practice by not opposing settlements in Israeli occupied East Jerusalem al-Quds and the occupied West Bank.

President-elect Joe Biden has said his administration will restore US opposition to the settlements which are considered illegal under international law.

Trump, who has lost the 2020 presidential election, has said the US is no longer considering Israeli settlements in the occupied West Bank “inconsistent” with international law.

Trump himself has described the scheme as the “deal of the century.” The deal envisions Jerusalem al-Quds as “Israel’s undivided capital” and allows the Tel Aviv regime to annex settlements in the occupied West Bank and the Jordan Valley.

The UN Security Council has condemned Israel’s settlement activities in the occupied territories in several resolutions.

Since Trump took office in December 2016, Israel has stepped up its settlement construction activities in defiance of United Nations Security Council Resolution 2334, which has pronounced settlements in the West Bank and East Jerusalem al-Quds “a flagrant violation under international law.”

More than 600,000 Israelis live in over 230 settlements built since the 1967 Israeli occupation of the Palestinian territories of the West Bank and East Jerusalem al-Quds.

Palestinians want the West Bank as part of a future independent Palestinian state with East Jerusalem al-Quds as its capital.

The last round of Israeli-Palestinian talks collapsed in 2014. Among the major sticking points in those negotiations was Israel’s continued settlement expansion on Palestinian territories.

Palestinians, who have always been subjected to systematic violations of their rights at the hands of Israelis, have warned that Tel Aviv’s actions will only get worse after normalizing ties with the United Arab Emirates (UAE) and Bahrain, in what is seen by Palestinians a betrayal of their cause.

The UAE, Bahrain, and Sudan have normalized relations with the Tel Aviv regime. The Emirates claimed in August that its normalization pact would pause Israel’s plans to annex Palestinian territory.