Home / *News and analysis / Ghaani To Palestinian Resistance: We Will Not Fail to Support You 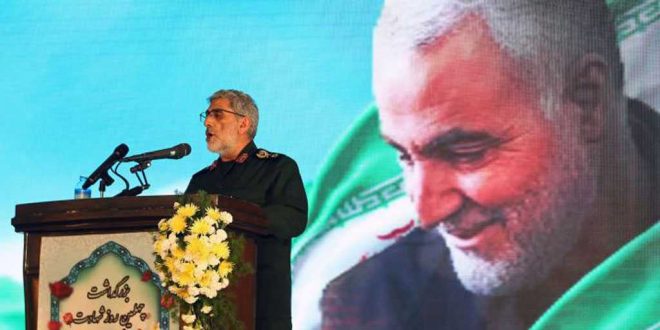 “You gave the usurper enemy a taste of terror, defeat, and humiliation,” the letter reads.

“I am addressing you as a brave leader who has made sacrifices. I address all the leaders and mujahideen in all the resistance factions, and I address you on my behalf and on behalf of the leadership of the Islamic Republic. Peace be upon the honorable people of Gaza, who embrace their resistance and are steadfast in facing the brutality of the enemy. Peace be upon the Palestinian people in Al-Quds, the West Bank, and all the cities occupied since 1948,” Ghaani continued.

“The Palestinian people have proven to the world that they are alive, and the years cannot make them forget their right as the delusional imagined. We are living with you the details of the great battle of the Al-Quds Sword that you are fighting with all your brigades and companies. This battle opened a new era in the struggle with the enemy, and your resistance is engraving in blood and fire an equation that the enemy cannot isolate Al-Quds without a deterrent response.”

“The Grand Ayatollah Imam Ali Khamenei confirmed that the enemy is on a downward trajectory and inching towards a demise. This will not stop, and the Al-Quds Sword battle brought the nation’s pulse back to its sanctity and showed that the participants in selling Palestine represent only themselves and will regret their betrayals.”

Ghaani also told the commander of the Al-Qassam Brigades that through the group’s steadfastness, “you along with the various resistance factions have written a great epic that proved the weakness of the enemy, and I assure you that we remain loyal to the pledge from the martyr of Al-Quds, Commander Hajj Qassem Soleimani. We will not leave Palestine alone no matter how great the pressure is, and regardless to what degree the siege intensifies. Let the enemy know that Palestine today is not alone. Rather, beside is a resistance axis that is getting bigger, stronger, and more coherent.”

The commander of the Quds Force concluded by saying: “Al-Quds is the compass of the axis of resistance and Qibla of its jihad. I’m confident that the living martyr who spent his life in the first ranks of the jihad squares would bring victory.”

Ghaani also sent a letter to the commander of the Quds Brigades, Akram Al-Ajouri, in which he applauded the group’s “steadfastness unity, wise leadership, and courage.” According to Ghaani, these attributes “destroyed the pride of the Zionist army.”

“Your increasing jihadist capabilities were able to inflict heavy losses on the Zionist army, surpassing what the enemy has seen so far, and even what it imagines.”

“We are with you as we were during the era of the martyr of Al-Quds, Commander Hajj Qassem Soleimani. We are with you with our souls and our bodies and with all the strength and capabilities that God Almighty has bestowed upon us. We have no doubt that we will enter the blessed Al-Aqsa Mosque to pray in it with pride and power,” he added.

“We will not fail to champion you no matter the challenges and risks until this usurper entity is gone.”

Ghaani concluded his letter to Al-Ajouri by affirming the words of Grand Ayatollah Imam Sayed Ali Khamenei that “combating the cruel entity is a struggle against terrorism and a public responsibility.”

“I kiss your jihadist hands that are paving the way for the great conquest.”