TERHAN, Oct 28 (MNA) – Leader of Islamic Revolution Ayatollah Seyyed Ali Khamenei has issued a letter to the young people in France, calling on them to question the double standards of their president over freedom of expression.

Following recent flagrant insults to the Holy Prophet of Islam in France, the strong support of the French President Emmanuel Macron and the Cabinet of that country for these malicious actions under the guise of “freedom of expression,” and also the role played by that government in spreading Islamophobia, Ayatollah Khamenei has raised important questions in a message to the French youth.

Here is the full text of his message:

The next question to ask is: why is it a crime to raise doubts about the Holocaust? Why should anyone who writes about such doubts be imprisoned while insulting the Prophet (PBUH) is allowed?

Macron has sparked outrage across the Muslim world by accusing French Muslims of “separatism” and describing Islam as “a religion in crisis.”

He has also publicly attacked Islam in defense of the publication of derogatory cartoons of Prophet Muhammad (PBUH).

Such blasphemous remarks have led to widespread anger across the Muslim world. 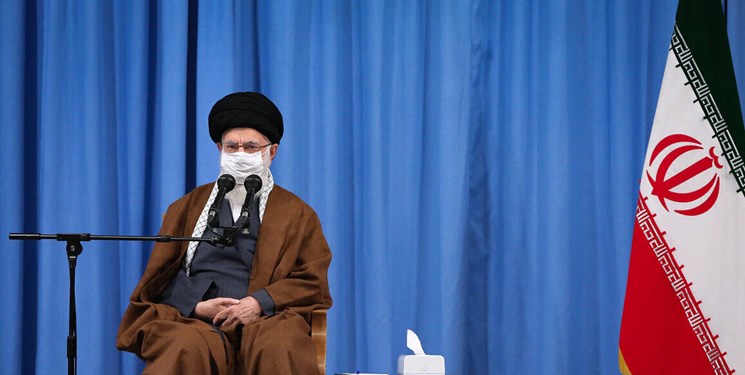 TEHRAN (FNA)- Supreme Leader of the Islamic Revolution Ayatollah Seyed Ali Khamenei in a message to the French youth strongly blasted the destructive role played by French President Emmanuel Macron and his government in supporting hatred against Muslims and spreading Islamophobia, following the recent sacrilege of Islam’s Holy Prophet Mohammad (PBUH) in the European country.

The Iranian Leader blasted the role played by the French government in spreading Islamophobia, and raised important questions in his message.

Here is the full text of Ayatollah Khamenei’s  message  addressing the French youth:

The next question to ask is: why is it a crime to raise doubts about the Holocaust? Why should anyone who writes about such doubts be imprisoned while insulting the Prophet (PBUH) is allowed?

In recent weeks and after a French teacher was beheaded by an ISIL member after he displayed cartoons of the prophet of Islam, French President Emmanuel Macron attacked Islam and the Muslim community, accusing Muslims of “separatism”, and he said previously that “Islam is a religion in crisis all over the world”.

The incident in Paris coincided with a provocative move by Charlie Hebdo, a left-wing French magazine infamous for publishing anti-Islamic content, which has drawn widespread anger and outrage across the Muslim world.

The caricatures were first published in 2006 by a Danish newspaper Jylllands Posten, sparking a wave of protests.

In relevant remarks on Monday, Iranian Parliament Speaker Mohammad Baqer Qalibaf strongly deplored the French officials for the sacrilege of Islam Prophet Mohammad (PBUH), warning that their tricks and deception against Muslims will backfire.

“The French officials’ acts have hurt the hearts of the monotheists of the world. Those who do not tolerate the slightest words against themselves, have now resorted to the highest level of ugliness and blasphemy to show enmity towards Islam and all the heavenly religions, and they show that they do not know anything of humanity, kindness, peace, and brotherhood among human beings,” Qalibaf said, addressing an open session of the parliament in Tehran.

“We strongly condemn the recent ugly measures of the French rulers,” he added.

Qalibaf underlined that such blind and inhuman blasphemous comments and acts may not eliminate the light of Islam’s Prophet (PBUH) and the message of God, warning that their tricks and deception against Muslims will backfire on them.

The Iranian foreign ministry had also on Saturday strongly deplored the “stubborn” continuation of blasphemous acts and remarks against the Great Prophet of Islam (PBUH) in France.

“Undoubtedly, the unacceptable and violent actions of a few extremists, which are originated from an extremist and deviant ideology in the Islamic world, and, ironically, is also owned by political partners close to the West and the US, no way can be a justification to insult and disrespect a heavenly figure respected by 1.8bln Muslims in the world,” Foreign Ministry Spokesman Saeed Khatibzadeh said.

“No doubt the unjustifiable position of the French officials is not an appropriate and prudent response to the extremism and violence that is condemned in its place, and it causes hatred more than ever as we are witnessing some suspicious and disgusting acts of insult to the holy Quran by a few extremist and anti-Islam streams in a number of European states which are strongly condemned,” he added.

Khatibzadeh underscored Iran’s support for the Islamic countries’ position to deplore such acts, describing sacrilege of Islamic values and beliefs of Muslims as unacceptable and denounced.

The General Secretariat of the Organization of Islamic Cooperation (OIC) last Friday condemned continued attacks and incitement against Muslim sentiments and insults of Prophet Muhammad (PBUH).

A statement by the OIC criticized the “discourse from certain French politicians, which it deems to be harmful to the Muslim-French relations, hate-mongering and only serving partisan political interests”.

It said it “will always condemn practices of blasphemy and of insulting Prophets of Islam, Christianity and Judaism” as it condemned any crime committed in the name of religion.

It also denounced the killing of French teacher Samuel Paty, who was decapitated earlier this month in a Paris suburb.

The statement rejected the incitement against Islam, its symbols and linking Islam and Muslims with terrorism.