TEHRAN (FNA)- Hundreds of Iranian university professors and academics in an open letter to the heads of the government, parliament and judiciary on Wednesday called for the expulsion of the UN nuclear watchdog’s inspectors after assassination of nuclear scientist Mohsen Fakhrizadeh.

“One of the proposed operational measures of the university professors is the immediate and unconditional expulsion of the International Atomic Energy Agency (IAEA)’s inspectors from Iran,” said a part of the letter signed by over 650 academics.

“Experience has shown that, unfortunately, some of these inspectors are spies who, by giving information about nuclear and defense activities and figures to the foreign intelligence and espionage apparatus, have paved the ground for martyrdom of our scientists,” it added.

The Iranian academics also called for a decisive and rapid response and punishment of those involved in the assassination of martyr Fakhrizadeh.

Iranian nuclear scientist Mohsen Fakhrizadeh’s car was targeted by an explosion and machinegun fire in Damavand’s Absard 40 kilometers to the East of Tehran on Friday. 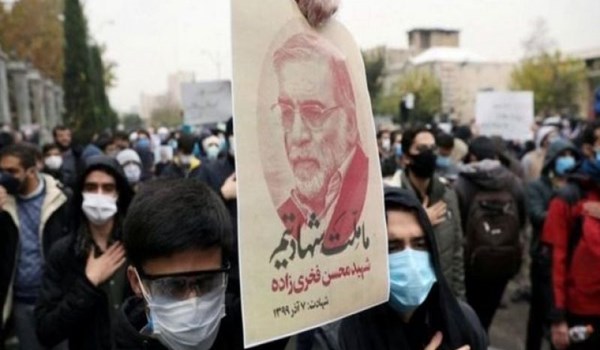 In a relevant development on Tuesday, people from different walks of life, including university students, gathered in front of the parliament in Tehran, calling on the legislative body to reduce cooperation with the UN nuclear watchdog and demanding the Islamic Revolution Guards Corps (IRGC) to give a crushing response to the terror attack on nuclear scientist Mohsen Fakhrizadeh.

The ralliers carried placards which called for an immediate stop to the implementation of the Additional Protocol to the Non-Proliferation Treaty (NPT) and expulsion of the IAEA’s inspectors from Iran.

They also called on the legislators to show a firm and powerful reaction to the assassination of martyr Fakhrizadeh and approve laws which restrict Iran’s vast cooperation with the IAEA.

The demonstrators chanted “death to the US” and “death to Israel” slogans, calling on IRGC Commander Major General Hossein Salami and IRGC Aerospace Commander Brigadier General Amir Ali Hajizadeh to give a crushing and revolutionary response to the perpetrators of Fakhrizadeh’s assassination.

They also underlined the need for the Iranian officials, specially the security and military officials, to take tough actions to make enemies understand that the era of hit-and-run has ended.

A similar gathering had also been held in front of the parliament building on Saturday, where demonstrators urged the government and Armed Forces to take revenge for the assassination of nuclear scientist Mohsen Fakhrizadeh.

At the gathering, the ralliers chanted ‘death to the US’, ‘death to Israel’ and ‘we are ready for martyrdom’ slogans, and condemned the terrorist attack on Fakhrizadeh.

They also called for a harsh revenge from the culprits and perpetrators of the assassination, asking the Atomic Energy Organization of Iran (AEOI) to stop inspections of the IAEA whose reports on Iran’s nuclear program and naming of the Iranian nuclear scientists have led to the assassination of several of them so far.

The Iranian parliamentarians in their Tuesday meeting ratified the generalities of a bill to adopt strategic measures to remove sanctions against the country and defend the nation’s interests.

The lawmakers had last month given green light to the single-urgency of the strategic motion, but the plan turned into a double-urgency on Sunday after the assassination of the Iranian nuclear scientist Mohsen Fakhrizadeh.

After ratification of the generalities of the bill with 251 yes votes, Parliament Speaker Mohammad Baqer Qalibaf said that the move sent this message to the enemies that the one-way game has ended.

Also, Rapporteur of the Iranian parliament’s National Security and Foreign Policy Commission Abolfazl Amouyee said that the bill pursues several goals, including opening the locks on Iran’s nuclear industry and making the western states to pay a price for imposing and supporting sanctions against Iran. Why doesn’t Iran rely on US, UK-produced vaccines?

TEHRAN, Jan. 10 (MNA) – There are various reasons that the Islamic Republic of Iran ...