Home / World News / Iranian Deputy FM: Stop of N. Retaliatory Moves Possible Only after Verifying US Lifting of All Sanctions Iranian Deputy FM: Stop of N. Retaliatory Moves Possible Only after Verifying US Lifting of All Sanctions TEHRAN (FNA)- Deputy Iranian Foreign Minister Abbas Araqchi said that his country will stop its retaliatory nuclear measures only once it verifies removal of all sanctions by Washington.

“The lifting of all American sanctions is the first step to revive Joint Comprehensive Plan of Action,” Araqchi said at the virtual session of the JCPOA Joint Commission on Friday, adding that, Iran will halt retaliatory steps only if it verifies the removal of sanctions by the US.

He made it clear that there is no need to any renegotiation, stressing, “The United States can return to the agreement and end lawbreaking just in the way that it pulled out of it and imposed illegal sanctions against Iran.” 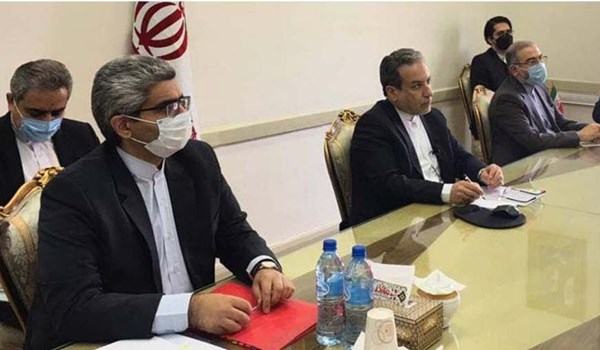 The session of the JCPOA Joint Commission was held virtually on Friday with presence of the remaining members of the deal – Iran, Russia, China, Britain, Germany and France.

In relevant remarks on Wednesday, Iranian First Vice-President Eshaq Jahangiri underlined that the US must return to the Joint Comprehensive Plan of Action (JCPOA) and lift all the unilateral sanctions it has imposed on Iran so far.

Referring to the US maximum pressure failure, Jahangiri said that the US must return to the JCPOA and lift the sanctions it has unilaterally imposed on Iran.

He stressed that the US is required to return to the JCPOA and lift sanctions, adding that a good condition will happen for the country’s production, and the producers, who were active in production in the era of sanction, should be supported.

Due to the US economic war against Iran, he added that more than 2,500 items were banned from entering the country, which was an opportunity for domestic producers to be more active in the production. Iranian and Russian military vessels conducted the first stage of their naval maneuvers in the ...