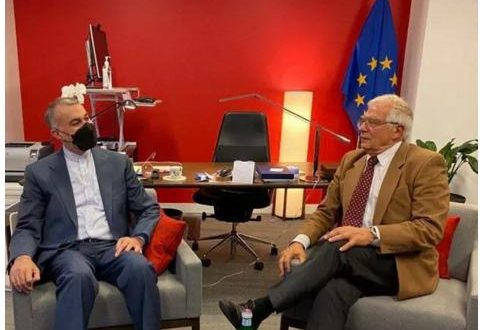 Iranian Foreign Minister said that unfortunately, the Biden administration’s behavior and policies in relation to Iran and the JCPOA have so far been unconstructive.

Iranian Foreign Minister Hossein Amir-Abdollahian met and held talks with European Union Foreign Policy Chief Josep Borrell on the sidelines of the 76th UN General Assembly (UNGA) meeting on Tuesday on various issues, including the JCPOA and developments in Afghanistan.

Emphasizing that Raeisi’s administration seeks a practical outcome in the negotiations, Amir-Abdollahian said, “Our criterion is the action of the other parties, not their comments. The new administration is reviewing the previous negotiations. We do not waste time, nor do we accept the unconstructive behavior of the United States.”

“Unfortunately, the Biden administration’s behavior and policies in relation to Iran and the JCPOA have so far been unconstructive. Although Biden has verbally criticized Trump’s policies, he has in practice pursued the same policies toward Iran,” he added.

Appreciating Borrell’s efforts to follow the negotiation process, the FM said, “If the Americans think they are concluding by putting pressure on Iran, they are completely wrong. Instead of pressuring the United States, which has violated the JCPOAl, to return to its commitments, the three European countries have repeatedly called for Iran to hasten negotiations.”

“All parties should know that the JCPOA must have tangible results for Iran, and in practice, we will feel the lifting of illegal sanctions. If others return to their commitments, we too are ready to stop our compensatory actions,” he stressed.

Josep Borrell, for his part, said, “The success of the JCPOA is very important not only for Iran and the P4 +1 but also for the region and the world. The European Union has always been critical of Trump’s destructive policies and actions in withdrawing from the JCPOA, but the decision of the new US administration has created a new chapter in maintaining and reviving the deal.”

“The US responsibility for creating the current situation is clear, but at the same time, all parties should help us reach a mutually satisfactory outcome. The first step in this direction is to determine the time of the Vienna meeting,” he added.