Home / *News and analysis / Iran Teaches the US a Lesson in the Gulf: We Are to Win 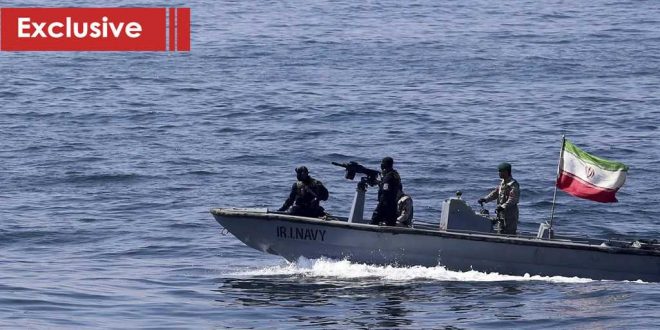 Iran Teaches the US a Lesson in the Gulf: We Are to Win

Beirut – The US military navy force has been dealt a devastating blow to its moral by the Iranian revolutionary guards.

A week ago, the Gulf has witnessed a very significant event when the US military carried an action of aggression and piracy attempting to take over an Iranian shipment of oil heading towards Venezuela.

The Iranian revolutionary guards were there to respond quickly and they raided the ship and directed it to the Iranian waters and thus sabotaging the US aggression and putting its military into shame and humiliation.

This is not the first time Iranian forces respond swiftly and efficiently to US aggression.

In fact, no recorded history has been noticed of any regional power standing to the Americans and preventing them from exercising their acts of piracy.

The Islamic Republic of Iran holds tight to a glorious history of confronting and opposing the Americans in the region though efficiently.

This poses a real question about the mounting Iranian military might and its readiness to challenge the Americans.

Iran has already done clear reactions against American forces whether in Syria, Iraq or in the high seas.

This adds credit to Tehran’s genuine position of opposing the US hegemony in the region and the world. The decision of sending oil shipments to Venezuela which has been going on for quite some time is an example about Iran’s intent to break the US siege against Caracas.

Iran has taken similar steps to ease the suffering and alleviate the crisis of people under US siege in both Syria and Lebanon.

Washington is causing a lot of damage to countries economics, imposing siege and sanctions on people, countries, entities, and even individuals. Those sanctions are not justified and they are not based on any legal grounds, hence Washington with its well-known arrogance feels no obligation to give any explanation or to produce any evidence to support its blockade or campaigns.

Here, it is important to highlight the necessity of fighting back Washington’s stern and tough oppressing measures by creating a world legal body that could hold Washington responsible for its crimes against humanity in this regard.

More important, that many governments, international organizations, human rights community, take the initiative and start breaking US siege in the affected and targeted countries. What happened to Iraq because of the US siege should not be allowed to happen again, and what is happening in Yemen nowadays should be stopped at once.

What Iran is doing is a real accomplishment, an achievement that amounts to be a victory against Washington. It is not a simple action to stand against the US and break Washington siege here or there. This is setting an example for other governments to do the same, and giving the hope to people around the world an excellent lesson that the US and its military and economic aggressions are not a fate that cannot be changed, but a challenge that could and should be properly addressed.

Iran gives the lesson again to the whole world, once you decide to confront and resist Washington’s hostilities you can, and you also can win against it, definitely.