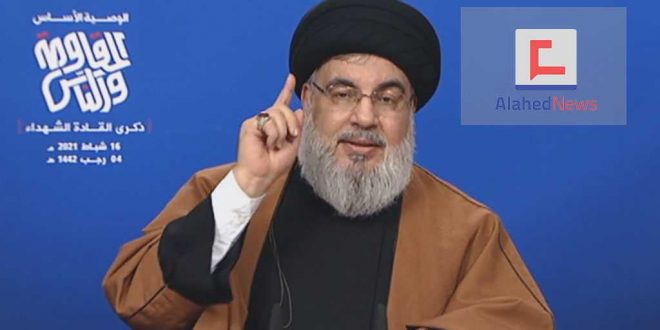 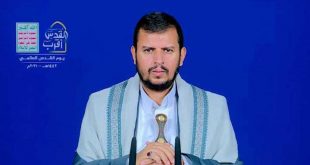 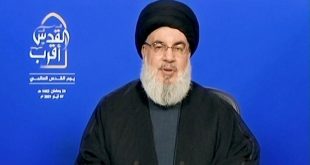 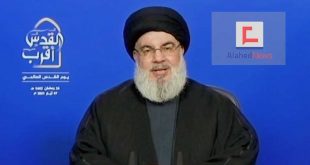 Sayyed Nasrallah: The Axis of Resistance Shapes Region’s Future, ‘Israelis’ To be Expelled By Force

In a televised speech on Tuesday marking Hezbollah’s Martyr Leaders Day, Sayyed Nasrallah said that the occasion follows the 42nd anniversary of the Islamic revolution in Iran, which is an example on maintaining sovereignty and independence.

“Forty-two years have passed on the victory of the Islamic Revolution in Iran; The Isalmic Republic resisted and developed on every level until it became a great and considerable regional power,” His Eminence stated.

Regarding the Bahraini revolution’s February 14th anniversary, Sayyed Nasrallah further hailed the Bahraini people who sacrificed a lot to obtain their freedom, atop of them is Ayatollah Sheikh Isa Qassim, adding that “the Bahraini people are struggling to return their country to its normal situation after its rulers have turned it into a base for normalization with ‘Israel’.”

Praising the common characteristics of martyr leaders enjoyed, Sayyed Nasrallah said that they were dedicated to resistance and tolerated all hard circumstances to develop the project of resistance.

“The resistance of our martyr leaders developed and became followed by the enemy before the friend because it threatens its existence,” His Eminence underscored, noting that in our time, “We need stances similar to those of Sheikh Ragheb Harb to confront normalization with ‘Israel’.”

We preserve the will of Sayyed Abbas al-Moussawi by preserving the resistance and serving the people, Sayyed Nasrallah added, stressing that “The most important service we offer to the people is to preserve their existence and defend their lands, dignity and country.”

“We carry on the will of Sayyed Abbas al-Moussawi and work within it in all fields, and when an ‘Israeli’ or a terrorist threat endangers our people we won’t hesitate in defending our honorable people.”

In the same context, the Hezbollah leader stressed that “We need the spirit of martyr Imad Mughniyeh to develop the project of resistance, and the brothers of Hajj Imad are doing this nowadays.”

Elsewhere in his remarks, His Eminence slammed any talks about an international resolution under the United Nations Charter VII regarding the formation of the Lebanese government, which he referred to as a call to war towards which we mustn’t remain silent.

“Calling for internationalization to resolve domestic issues is unacceptable regardless of who said so, and it can pave the way for undesirable consequences,” His eminence added.

Commenting on the electronic armies and the media outlets that grab any incident to point the blame on Hezbollah, Sayyed Nasrallah described those sides as saying “There is a chorus in Lebanon whose goal is to insult Hezbollah without any pretext. This only represents them, and all of their acts won’t affect us.”

In this respect, the resistance leader called on its audience not to be dragged to this chorus’ behavior as all the blamed accusations contradict all norms, laws and traditions.

“There is a systematic, managed and paid targeting of Hezbollah. This campaign has failed to distort the image of resistance within its people. Some reactions by some of the resistance’s audience as a result of this campaign shouldn’t be considered as an act of the entire audience, although they should be dealt with,” Sayyed Nasrallah made clear.

In reference to the yet unannounced results of investigations regarding the Beirut Port blast which have already ended, Sayyed Nasrallah noted that he had previously called on the Lebanese Army, the Internal Security, and the Judiciary to announce the result.

“It is the duty of the concerned parties in the Lebanese Judiciary to announce the results of the investigations regarding the Beirut Port blast, and we have been told that the due amounts of insurances for the families of the martyrs and the owners of damaged properties is estimated at $1.2 billion,” His Eminence said while renewing calls for announcing the results of the investigations.

“Nobody doesn’t want the formation of a Lebanese government,” the Hezbollah leader emphasized, adding that “It is in everybody’s interest to form a government, and talking about waiting the Iranian nuclear issue is baseless.”

“Waiting foreign powers is futile and pressures may push some sides to adhere to their stances. It is unjust to hold the president responsible for not forming the government.”

Pointing that Hezbollah understands other parties’ demands to hold certain portfolios, Sayyed Nasrallah noted that “We don’t understand insisting on forming an 18-minister government while some sides believe that the aim behind this is to eliminate their participation.”

On the 15th anniversary of the understanding that was made between Hezbollah and the Free Patriotic Movement, Sayyed Nasrallah pointed to that the resistance movement wanted it to be a base for wider understandings with other powers.

“The understanding has made a group of achievements that served Lebanon, Hezbollah, and the FPM. We don’t agree on some negative remarks that were made by the FPM as they serve as a material for those who are waiting such things.”

Meanwhile, Sayyed Nasrallah affirmed the solid relationship with the FPM and expressed keenness to develop it.

Lebanon As Seen Via Social Media

Sayyed Nasrallah made clear that Tel Aviv, Washington, and their allies announce that they form electronic armies to cause strife and disputes.

“The Islamic Republic of Iran has shown endurance and braveness regarding its nuclear issue, and there are clear ‘Israeli’ and Saudi concerns regarding it.”

As for the revival of Daesh [the Arabic acronym for terrorist ‘ISIS/ISIL’ group], Sayyed Nasrallah said that “The Americans’ talking that their mission doesn’t include protecting the oil in Syria anymore came along with reviving Daesh,” making clear that the Americans want to remain in Syria and Iraq.

“They might mobilize Daesh in both countries, and the new US administration is using this pretext to remain there,” His Eminence noted, stressing however that “those who defeated Daesh in the past will defeat it again, and working to defeat the terrorist organization should be crushing so that it won’t be able to be revived.”

In reference to the new US administration of Joe Biden, Sayyed Nasrallah said that Washington’s announcement of ending its support for the war on Yemen is a positive step that is a result of the Yemenis’ steadfastness, noting that any call for ending the war on Yemen is positive, and the brothers in Yemen are aware of the situation, which is normal and required.

“The Yemenis steadfastness and tolerance of the siege, the pain, and the bombing pushed the silent world to issue daily reports to defend the aggressive Saudi Arabia, and the Yemeni Army today is in an advanced place, and the other side is screaming in Marib due to the progress the Yemenis are making,” Sayyed Nasrallah explained.

“The honest and steadfast Yemenis will bear the fruits of their steadfastness, and the concerns are growing among Saudi Arabia and the enemy’s entity.”

The Declining ‘Deal of the Century’

Mentioning that the ‘Deal of the Century’ has majorly decreased, Sayyed Nasrallah found it as a clear explanation that it either ended or is declining. “This is a source of concern for the ‘Israelis’ and the Saudis.”

The persistence of the Palestinians and the Axis of Resistance in the face of Trump resulted in the decline of the ‘Deal of the Century’, His Eminence noted, criticizing the Zionists exaggeration regarding the Arab acceptance of normalization: “We’ve seen the stances of the Bahraini people, and before them the Egyptian and Jordanian people against the normalization.”

He then urged boycotting the ‘Israeli’ enemy and rejecting normalization as an important step that represents the religious and national sense of belonging.

“Rulers in Sudan will realize that normalization won’t solve their economic problems, which already happened with countries that normalized ties years earlier,” Sayyed Nasrallah said, noting that some people’s visits to the enemy’s entity or the actions of some electronic armies don’t express the Arab and Muslim popular mood.

It Is the Era of the ‘Axis of Resistance’

In response to hollow remarks made by ‘Israeli’ military chief Aviv Kochavi, Sayyed Nasrallah concluded with a clear and precise message.

His Eminence warned that the game of combat days is a dangerous one for the ‘Israelis’ as nobody can guarantee that such a game won’t lead to an inclusive and major war.

Kochavi claimed that the Zionist military will not hesitate to launch an attack in full force against any civilian neighborhoods, installations or even residences where unmanned missiles, rockets and aircraft are being stored or launched from.

“In a case a war broke out, the ‘Israelis’ shouldn’t brag about their strength as the enemy’s internal front will face incidents that it didn’t witness since the establishment of this entity in 1948.”

“This is why I tell you to stop playing with fire,” Sayyed Nasrallah emphasized, telling the enemy that it should be aware of its limits.

“The time when the enemy threatens people and they remain silent has gone! There is a resistance from Gaza to Lebanon to the entire regional countries.”

This matter cannot be run the same way they used to in old mentalities, Sayyed Nasrallah said. “It is a different time; it is the era of the Axis of Resistance which is following all developments quietly and precisely.

“Don’t think for a moment that all the ongoing developments would affect the will of the resistance to confront or change the equations,” Sayyed Nasrallah conluded. 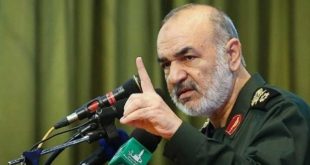