Home / *News and analysis / WHO: 75% of Yemen’s Children Chronically Malnourished 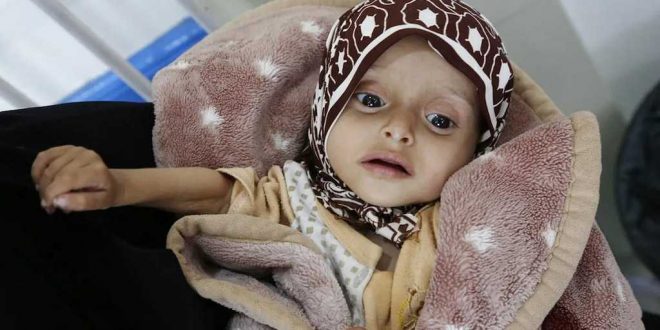 WHO: 75% of Yemen’s Children Chronically Malnourished

The World Health Organization [WHO] warned that 75 percent of Yemeni children suffer from acute malnutrition, as Saudi Arabia keeps bombing the southern impoverished neighbor in defiance of international calls to end its bloody war.

In a post on its Twitter account on Monday, the UN agency responsible for international public health warned that three out of four children in Yemen are “chronically malnourished.”

It also estimated that 16.2 million Yemenis – more than half of the country’s population of 30 million – are food insecure.

Acute malnutrition is responsible for almost one-third of all deaths in children under five years of age. It damages a child’s physical development and causes intellectual or cognitive impairment among those who survive. Malnutrition is largely irreversible, perpetuating illness, poverty, and inequality.

Today, Yemen is one of the most dangerous places in the world for children to grow up, with high rates of communicable diseases, limited access to health services, and inadequate sanitation and hygiene systems.