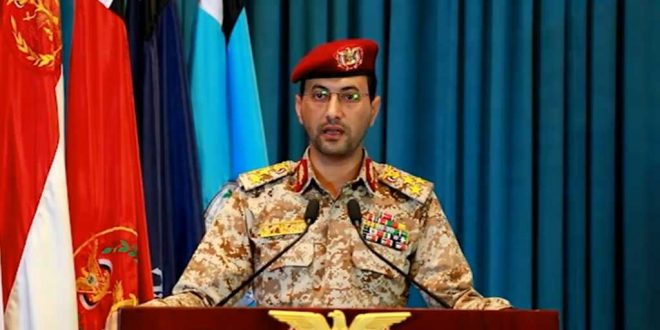 Yemeni Armed Forces Spokesman Brigadier General Yehya Sarae announced in a statement on Tuesday the success of the Yemeni Army and Popular Committees’ operations in Marib, detailing the results of the second phase of Operation ‘Spring of Victory.’

The Yemeni Armed Forces carried out successful military operations in al-Bayda, Shabwa, and Marib provinces, Saree explained, pointing to the entire liberation of al-Bayda Province, and several districts from Shabwa Province, thanks to the continued support from the tribes of the three provinces.

“The Yemeni forces, with the support of the indigenous tribes, continue their military operations to liberate the country in which freedom and independence are achieved,” Saree said.

“We were able to liberate Al-Juba and Jabal Murad districts in Marib, with an estimated area of 1,100 km, during the 2nd phase of Operation “Spring of Victory”, and our Mujahideen continue to advance towards Marib city, as the Saudi aggression’s mercenaries and leaders flee the area,” he said.

The spokesman further noted that the Saudi aggression warplanes launched 159 raids. However, they failed to stop the progress of our Mujahideen during the 2nd phase of the operation.

“Our missile forces launched 47 operations, 31 of which targeted the enemy sites in the Yemeni occupied areas, and 16 operations in the Saudi depth,” he noted, adding that “Our forces succeeded in liberating most of the areas of Marib, and we vow to continue to perform our jihadi duty towards our people and country.”

“We won’t hesitate to move forward towards liberating the remaining lands of Marib,” Saree underlined.

He then noted that more than 200 of the Saudi aggression mercenaries were killed and more than 550 injured during the second phase of the operation.

“As we’re surrounding the outskirts of Marib from several sides, we reiterate to the citizens that we will continue to perform our duties towards them,” Saree assured the citizens.

He finally addressed the Saudi regime as saying: “Your absurd, aggressive and criminal war will return as humiliation, disgrace and defeat to you.”