A Journey to Islam My Journey to Islam

I was born in Canada into a nonreligious family, so I never knew or understood anything about God or who he really was. Growing up I went to a Catholic school and they do not really talk about the bible, or about God just bits and pieces and the same thing every year. I always knew that there was a God but who was he?  The only time I ever prayed was in school was when we had to go to church as a field trip, and this was more like a fun outing for us to get out of school then a religious outing.

I never took it seriously because my teachers never did so I thought why should I? They would tell us one thing then the next day they would go back on what they said the day before and change it.  They would never have the right answers for my questions.  I never felt like the Catholic religion was the right place for me because I was not getting the answers to my questions. I was lost in what to do or who to really turn to.

Then when I was about maybe 10 years old, we had members from the Mormon religion show up at our door. My Mother let them in and a few weeks later we were members of the church. We went for about a year or so, then stop for reasons I really do not know. Then when I was about 20 years old we got back into going to the Mormon Church after a lady who knew a young mother who my family was trying to help was Mormon.

The missionaries would always be at our house helping this girl to what they called the right path. They talked to us one day and we told them that we were members and that is how we got back into it. I was also older then so I knew that I could understand more about what was being taught. I really got into the church and was learning the truth about God and who he was so I thought. I was doing all the things a Mormon should do like go to church, attend classes, had teachers come to my house a few times a month etc. 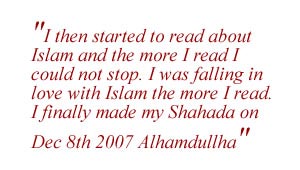 I never heard of Islam other then what the media had said about it, such as the women are treated like 2nd class citizens to men, that it was a cult, they never do anything but prey 5 times a day, marry lots of wives and the women hide their hair from the world. So when I met this guy from Iraq in college I stayed clear out of fear when I found out he was a Muslim because of what I heard.

I got over that fear when I started to talk to him and got to know him. I saw how he treated those around him and of course myself with respect and kindness. After that we got to know each other well and that lead to a blessing marriage Alhamdullha.  I then started to read about Islam and the more I read I could not stop. I was falling in love with Islam the more I read. I finally made my Shahada on Dec 8th 2007 Alhamdullha and I never have felt more alive and happier. I know that I made the right choice.

I know that I still have so much to learn about Islam and I know its hard as a new revert to Islam, but I will never regret the day I did my Shahada and that I know that I am on the right path. Also with the help of my husband and the good Muslims around me as the revert Muslim Family everything will come easier to me Inshallah.

I am so happy that I am apart of the Muslim family. Muslims are so giving and are willing to help others at any cost. I learnt that when my husband and I spent a few days in Montreal with a friend of his. This friend and his family who never met me before welcomed me into their home and treated me like a part of their family, I never felt more welcomed in a strangers home.

I would like to give my Thanks to Allah swt and the Prophet Muhammad and his family (p.b.u.t) to bless me to find the right path with the help of my husband who I thank and may Allah swt bless him always for his help to answer my questions and providing me with books and websites to help me learn more about Islam.

I would like to close my story with why I chose Fatima as my Muslim name. Fatima (p.b.u.h) the daughter of the Prophet Muhammed (p.b.u.h) was the first important person that I read about, not only did I think Fatima was a very beautiful name, but as a non-Muslim at that time I looked up to her and still do. I read her story (p.b.u.h) and it took me in. She lived such amazing but short life.  She would treat others with nothing but love and kindness even towards her servant. I know that I could not be like her but I hope to be a good muslima and do my best Inshallah with the blessing of Muhammad and his family peace be upon them.