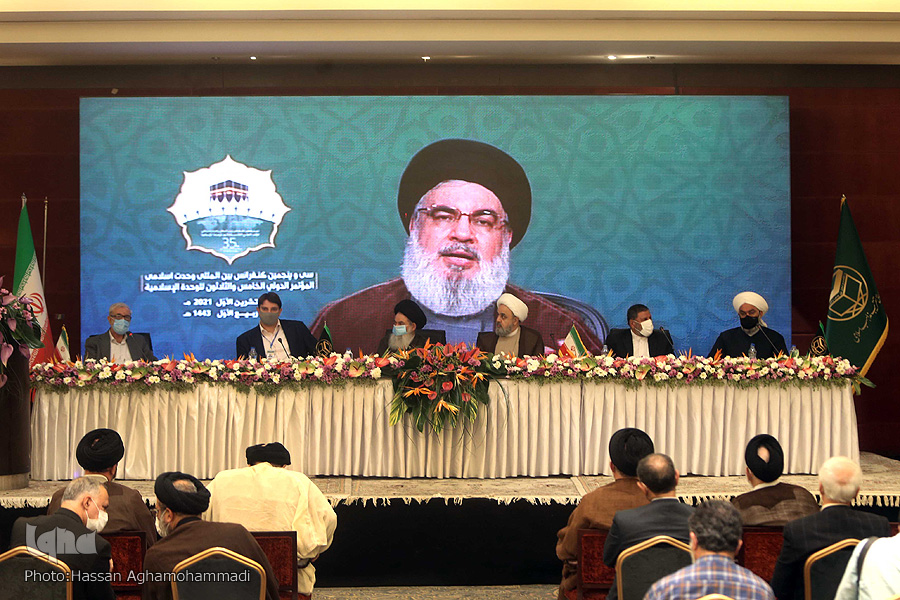 Seyyed Hassan Nasrallah in his speech hailed the Islamic Republic of Iran for holding several conferences, particularly after the victory of Islamic Revolution.

“The world of Islam has faced numerous challenges since long and the arrogant powers, on top of them the United States, have targeted Muslims though efforts have been made in line with boosting Islamic proximity after the Islamic Revolution,” he said.

Secretary General of Hezbollah resistance movement reiterated the achievements made by the Islamic Unity Conference during the 20 recent years and the effective role it played in overcoming the threats it faced.

“Materialization of all-out peace and unity among Muslims should be set our key objectives” said Nasrallah and added, “Independence beyond ethnicity and solidarity are the blessed things we are in dire need of.”

Hezbollah leader called for innovative views and also a rotatory committee to hold frequent meetings and Muslim scholars convene in Tehran in order to exchange experiences.”

He said, “Whenever we maintained unity and coordination, it turned out to be fruitful.”

Leader of Lebanon’s resistance movement made the comments in a video call to the opening ceremony of the 35th International Islamic Unity Conference held on Tuesday.

The theme for 35th Islamic Unity Conference is “Islamic Unity, Peace and Avoidance of Division and Conflict in the World of Islam” as participants discuss the latest situation in the world of Islam. Two meetings will particularly detail the views on the issue of Palestine and late Ayatollah Mohammad Ali Taskhiri, the late advisor of Supreme Leader and former secretary general of World Forum for Proximity of Islamic Schools of Thought.