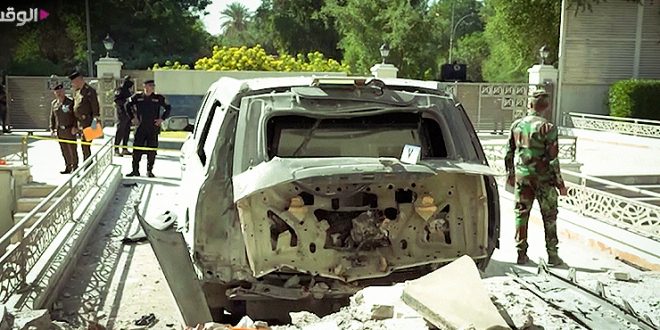 Alwaght- On Sunday, Iraqi army broke the news about a drone attack on the house of Prime Minister Mustafa al-Kadhimi. There are yet to be precise details of the attack and media outlets still publish contradictory information surrounding it. While some news outlets like AP quoted two Iraqi officials as claiming that seven of PM’s bodyguards had been wounded in an attack by two drones in Baghdad’s Green Zone but al-Kadhimi had not been harmed, others suggest that there was basically no armed attack and that an unarmed drone hit the wall of his residence.

Meanwhile, Iraqi News Agency (INA) published videos of the attack scene, showing the damage to the house left by the drone attack. In another report by INA, the Director of Public Affairs and Information of Interior Ministry Brigadier General Saad Moen said that the assassination attempt was made by three drones and the gunfire heard around 02:00 a.m. was by the security forces who shot down two drones but the third one struck the house.

The reports about the presence or absence of the Prime Minister at his residence at the time of the attack are different. Last night, an army-affiliated media group said in a statement that the PM was not home at the time of the incident, but on Monday Aljazeera quoted unnamed sources as saying that al-Kadhimi was at home.

“I was and still am a sacrifice project for Iraq and the people of Iraq. The missiles of treachery will not discourage the believers, and a hair will not be shaken in the light of steadfastness and insistence of our heroic security forces to preserve the security of the people, achieve the right and set the law in place. I am fine thanks God and among my people, and I demand calm and self-restraint from all, for the sake of Iraq,” a Twitter message of the PM read.

No group has yet claimed responsibility for the attack and the security forces did not publish any information about the suspects. Yahya Rasoul, the spokesman to the Iraqi armed forces, said a committee has launched an investigation into the assassination attempt and the takeoff site of the drones.

Home and foreign reactions to the assassination attempt

The announcement of the assassination attempt drew a wave of reactions at home and abroad; from strongly condemning the attack and calling on Iraqi groups to exercise self-restraint, to calling the incident “suspicious and labeling it a “conspiracy.”

While foreign media tried to link the attack to the Friday deadly shooting at peaceful protesters in a demonstration questioning result of the recent elections and calling for full manual recount, Secretary-General of Asaib Ahl Al-Haq Brigades and one of the political leaders protesting the election results Qais al-Khazali called the assassination plot an effort to turn the tide and link it to the demonstrations and the ongoing sit-ins outside the Green Zone, a neighborhood in Baghdad hosting the government buildings and foreign embassies. “We earlier cautioned against an attack on Green Zone,” he added.

While strongly condemning the attack, he stressed: “The perpetrators of this operation must be seriously sought and prosecuted according to the law, because this action is certainly an attempt to upset the equations only one day after the apparent crime of attacking and killing the demonstrators and setting fire to their tents.”

Abu Ali al-Askari, the security chief of Kataib Hezbollah group, on Sunday questioned the validity of the attack claims. In a post on Telegram, he called the drone attack and the assassination attempt “staged.”

“Playing victim is a threadbare method long gone in history. According to our very reliable information, nobody in Iraq is even willing to consume a drone to attack the house of the former PM,” part of his message read, adding: “If someone wants to harm this Facebook thing, there are less costly and more reliable ways to reach this goal. It is funny that he is inviting people for calm and self-restraint. It is not clear who may be concerned about him or lose control for him. May God curse himself and the one who approved him [as PM].”

“Yesterday, the peaceful protesters were killed and today the PM is targeted. Gentlemen, we are not on the battleground.”

Nouri al-Maliki, also an ex-PM and head of State of Law Coalition and an ally to the Popular Mobilization Forces (PMF) and protesting the election results, in a Twitter message said that the attack is a wrong and condemned move and is a tension in the public security that is facing increasing challenges.

Muqtada al-Sadr, the leader of the Sadist Movement, tweeted: “The terrorist operation that targeted the prime minister is a clear targeting of Iraq and its people, security, and stability, and a return to chaos so that non-governmental groups can take control and thus Iraq would live under chaos, violence, terrorism, dangers, and foreign interference. Our brave army and security forces should take control of the situation for Iraq to be strong.”

Secretary-General of Iran’s Supreme National Security Council called the incident a “new sedition of the foreign thinking rooms to destabilize Iraq.” He continued that foreign sides have brought nothing for the Iraqi people but division and instability through backing terrorist groups.

Also from Iran, foreign ministry spokesman Saeed Khatibzadeh condemned the attack and highlighted constant Iranian position in support of peace and security in Iraq. Khatibzadeh called for vigilance of all to plots targeting Iraq’s security and progress, adding that such incidents serve the interests of sides that over the past 18 years violated Iraq’s independence, security, stability, and sovereignty and are following their “evil” goals using terrorist groups and seditions. He expressed happiness with health of the PM, hoping that the Iraqi government, people, and political parties pave the way for growth and prosperity via unity.

Reasons the attack was a plot against Iraq and resistant forces

The drone strike on al-Kadhimi house took place at a time when the leaders of the Shiite political groups took a clear stand after the violent incidents on Friday to avoid destabilizing developments that can be exploited by the foreign sides and Iraq enemies. They even cautioned against a plot to deal a blow to the national interests and peaceful and democratic protests at the election results. The assassination attempt not only cannot realize the interests of the demonstrators but also runs counter to their pro-justice objectives and, using terror and intimidation, blocks their efforts to pursue their rightful demands for manual recount of all votes.

On the other hand, despite protesting the results and decrying the election fraud, the resistant movements will still have a strong position in the future parliament with the current results, to an extent that chance of formation of a new government without their presence is slim.

The plotters of the assassination attempt are pursuing sinister goals that need to be foiled by a show of vigilance of the political elite, the government, and the media.

Fueling a new sedition and pushing Iraq into a new instability has been one of the main goals of the plotters over the past years. One example is the efforts to revive ISIS terrorist group and sow a religious feud. One of the main aspects of these plots is shattering the Shiite camp and the backers of the resistance.

On the other hand, damaging the relations of Iraq and Iran as the two allies in the Axis of Resistance is another driver behind the designers of the drone attack. While the enemies, on top of them the US and its regional allies like the Israeli regime, Saudi Arabia, and the UAE, are sparing no opportunity to deal a blow to Tehran-Baghdad relations, their media label the deep-rooted resistant groups, who both fought Saddam dictatorship and the American occupation, “Iran-backed” to paint their protests at the election results and the consequences an Iranian interference in the Iraqi affairs. This is while Iran has constantly showed that Iraq’s security and political stability are among Tehran’s most important and strategic interests when it comes its neighbor.