Home / Miscellaneous articles / Along with Baghdad Election Crisis, an Inter-Kurdish Competition over Presidency Is Brewing 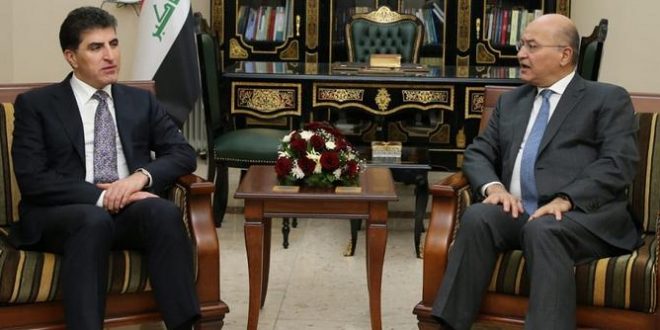 Along with Baghdad Election Crisis, an Inter-Kurdish Competition over Presidency Is Brewing

Alwaght- Along with the post-election crisis in central and southern Iraq, the Kurdish politics is scene to a confrontation between the two leading parties. Although in northern Iraq claims about election fraud are not made very seriously, the victorious parties are at loggerheads over distribution of posts and power in Baghdad, especially the seat of president which is a Kurdish share.

The Patriotic Union of Kurdistan (PUK) still considers the presidency to be its legitimate share in the power, but the Kurdistan Democratic Party (KDP), while emphasizing that it has won most of the seats among the Kurds, argues that it should hold the presidential post.

What are the grounds for such a tension between the two main Iraqi Kurdish parties? Which figures will possibly be vying for the position?

The difference between the two leading Kurdish parties is coming as in October general election the KDP, led by veteran politician Masoud Barzani, won 33 seats in the Baghdad-based Council of Representatives but the Kurdistan Coalition, an alliance of PUK and the Gorran Party, won only 16 seats. The New Generation Movement, another Kurdish actor led by Shasawar Abdulwahid, gained 9 seats.

Presently, like after 2018 vote, KDP and PUK are having challenge agreeing on a figure. The PUK asserts that the post is traditionally its share in the inter-Kurdish power sharing, and no matter what, one of its members should hold the position.

On the other hand, the KDP leaders believe that the division of power and giving the Baghdad presidency post to the PUK was the result of a strategic agreement between two charismatic Kurdish leaders, Jalal Talabani and Massoud Barzani, and is now expired after Talabani’s death. In their view, given the changes in the equations of power and the weight of each party in the Iraqi parliamentary elections, politics can no longer go on the basis of the 50/50 distribution.

The KDP leaders point out that all its rivals in the Kurdish region have not been able to win a total of 33 seats, so it is an inalienable right for KDP to hold the most important position assigned to the Kurds. The KDP holds that after Talabani it was pointless to stick to the old path and in 2018 its candidate Foud Hussein should have been picked president. This belief is driving a strong push to break the tradition and introduce a new rule through cooperation with other victorious parties in Baghdad.

In recent weeks, following the announcement of the election results, high-ranking members of the two parties made various statements about the future of the presidency. KDP leaders are insistent there should be a change to the tradition that allows presidency of a member of their party. On the opposite side, PUK talked about re-nomination of current President Barham Salih.

KDP, meanwhile, proposes a give and take deal: Give Kirkuk governor post and take central government presidency. But the PUK leaders reject it, saying that giving Kirkuk local government to the KDP will augment its influence and in the long term deal a blow to the PUK position and vote base.

However, there are now two serious options among the Kurds for the presidency. Unlike the previous term in 2018, when the KDP nominated one of its low-profile leaders for presidency, it now appears that it intends to nominate Nechirvan Barzani, the party’s second-in-command, to the Iraqi parliament for Baghdad post. From the party’s point of view, Nechirvan enjoys special popularity among Iraqi citizens and parties, and after his success in managing the affairs of the Kurdistan Region, he can be welcomed in Baghdad.

With all these in mind, a breathtaking duel between Barzani and Salih, both prominent technocrats, is much expected in the near future. Given the number of seats of the KDP and its possible coalition with Sayed Muqtada al-Sadr, the leading victor in Baghdad, and also Mohammed al-Halbousi, another winner in recent election, Barzani has a greater chance to break the existing power sharing rules among the Kurds. On the other hand, the PUK has a great ability to change the equations and can tip the scales in its favor. However, a deal over Kirkuk governor post can change the Baghdad equations and re-elect Salih for the post.