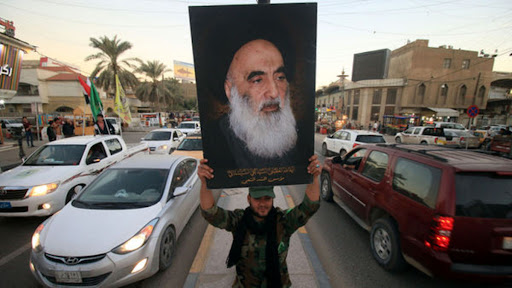 Alwaght- The religious city of Najaf in Iraq on Monday started its day with a historic fatwa. Iraqi media, citing office of the top Iraqi Shiite cleric Sayed Ali al-Sistani, reported that Ayatollah al-Sistani called “haram”, religiously forbidden, consumption of products of Israeli companies or companies supporting Israeli regime. The fatwa came as a response to an istifta, a question on religious matters.

The fatwa is coming less than a month after a meeting held in Erbil about relations with the Israeli regime that caused widespread outrage.

In September, the capital of the Iraq Kurdistan region Erbil hosted a meeting on normalizing relations with the Israeli regime. The meeting was non-governmental, but provoked many reactions. At the same time, the news came shocking to various Iraqi factions, even inside the Kurdish region, and caused a great deal of controversy, to the point that Iraqi officials intervened to arrest and punish the organizers. Many experts at the time warned that the so-called “peace” meeting, which was attended by hardly known figures, was a setup aimed at normalization with Tel Aviv, despite its agenda ostensibly being on peace, inter-religion dialogue, and fight against terrorism. They went on that with Baghdad reaction, the arrangement, which was by UAE-backed forces in Iraq, was left incomplete.

Social and political range of the fatwa

Occasionally, debates about the relationship with Tel Aviv are made by some pro-Western circles in Iraq, although they do not dare to speak out in the face of opposition from Iraqi public opinion. At the same time, Ayatollah al-Sistani’s recent fatwa banning Israeli goods can be seen as a response to these intentions. In Iraq’s history, the religious authority has always played a decisive role in the course of political and social developments, and now the recent fatwa will thwart any step towards the normalization with Tel Aviv.

At the same time, the followers and supporters of Ayatollah al-Sistani are very widespread not only in Iraq but also in other countries in the region and even Western and European countries, and therefore the recent fatwa will be of wide range.

Actually, the fatwa not only mobilizes the public opinion against any thaw with Tel Aviv and prevents any Iraqi government, even a pro-Western one, from raising the case but also increases the costs of normalization with the Israeli government, even in other Muslim countries in the region.

The fatwa is also uniting and brings solidarity with the Palestinians. The Palestinian people, over the past years only minimally supported by the Arab countries, now grow optimistic about support from Muslims in other countries.

The Israelis are well aware of the extent of influence of Ayatollah al-Sistani, and in general the religious authority, among the people. In 2019, Israeli Debkafile news website called the position and influence of the religious authority a “covert enemy” threatening the so-called Greater Israel project. The report added that the real threat does not come from Iran because “the Iranians are our overt enemies but the horrible danger comes from Iraq and specifically from city of Najaf and the Shiite Muslims.” The website held that Ayatollah al-Sistani, the founder of Popular Mobilization Forces (PMF), a force was born in opposition to ISIS terrorist group in 2014 following a jihad fatwa, is a major obstacle to Tel Aviv’s strategic interests and hence is a true example of covert enemy assumption. It highlighted his power to mobilize 4 million anti-terror fighters within a few days with just a “two-word fatwa.”

“The fatwa was implemented even by followers of other clerics in Najaf, Karbala, Qom, and Mashhad and this is a rare event,” reported Debkafile, adding: “He has founded several educational, financial, and service institutions whose range of activities goes beyond Iraq and sometimes even assist the government.”