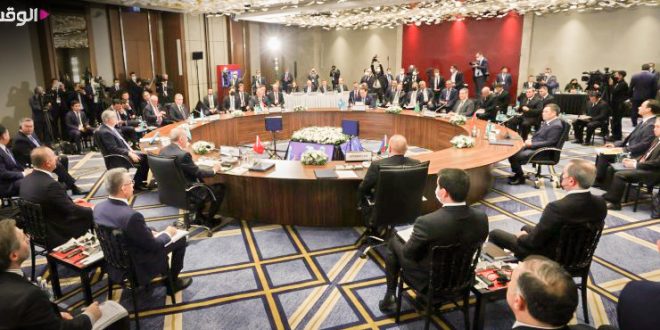 Alwaght- Less than six weeks to the Libyan presidential election, Paris hosted a conference on Libya with the presence of many actors with interests and influence in the North African country. The conference is aimed at offering international support to continuation of political power transition and arrangement of election in due time.

The conference was attended by officials from 30 countries, including French President Emmanuel Macron, German Chancellor Angela Merkel, Italian Prime Minister Mario Draghi, Egyptian President Abdel Fattah el-Sisi, US Vice President Kamala Harris and Russian Foreign Minister Sergei Lavrov, all of whose countries basically having a special influence on the developments in Libya. The meeting was also attended by the leaders of the two power poles present in the Libyan interim government, which is under UN supervision.

The meeting’s final statement stressed the need to maintain unity, hold elections on time and establish a legitimate government in the war-ravaged country.

There are questions here: How likely is an election without delay? Will the elections lead to a legitimate and powerful government in Tripoli? To answer these questions, we need to shed light on the main challenges ahead of the vote process in the country.

At the conference, several important issues were addressed, all having an emphasis on holding elections on time. In the final statement of the conference, the participants stressed the importance of holding the first presidential and parliamentary elections in the history of Libya in a “free, fair, inclusive and credible” way, as well as the opposition to any foreign interference in its affairs.

The conference called on all influential parties and Libyan candidates to commit to respecting the rights of their political opponents and accepting the election results. The Paris conference also warned that sanctions would be imposed on anyone inside or outside Libya trying to disrupt the election process or undermine its results.

The conference’s core point is return to legitimacy through election and a united government. However, there are serious doubts that there would be an implementation to statement’s recommendations. Essentially, adoption of a democratic system and accepting the principles of democracy by various actors requires some bases which seem unreachable in the current critical circumstances.

In discussing the possibility of realization of the conference goals, there must be an attention to some significant limiting factors:

Crisis among the government leaders caused by decade-long critical conditions: Recommendations for democratic political process, holding elections, and accepting the results by various political currents come while the country has been living a devastating civil war since 2011, the year revolutionary forces toppled dictator Muammar al-Gadaffi with NATO military assistance. The conflict broke the country in two parts, each with a government. Less than five years after the revolution, differences began to rock the new leadership, giving rise to UN-recognized Government of National Accord (GNA) in Tripoli and another led by warlord Khalifa Haftar in the east. In southwest, Tawariq tribes are in control. In areas controlled by Haftar, Tobo tribe has a key role. A large part of the north is held by tribes allied to the ISIS terrorist group.

Following Turkey’s serious intervention in the civil war since June 2020 and the defeat of Haftar-led forces, as well as the face-off of the two sides in the city of Sirte as a vital point between them and warning of direct Egyptian military intervention, the warring parties announced a ceasefire and pointed to diplomatic solution to the crisis. Negotiations ensued and finally they on June 5, 2020 agreed on a new transitional government. Mohammad al-Menfi, a diplomat from the east, was picked head of the new presidential council and Abdulhamid Dbeibah, a prominent businessman, was named prime minister. With such political turbulence the country underwent over the past years, talking about a democratic election is actually ignorance of the deep roots of the crisis among the political factions.

Tensions in leadership body: The Paris meeting was held at a time when it is unlikely that the election schedule goes as planned, or, more precisely, the two camps reach a consensus on election law. Some parties feel that the country is not yet ready to vote. Meanwhile, behind the scenes, tension between al-Menfi and Dbeibah is escalating.

Al-Menfi orbit was even angry that the PM Dbeibah, whose main job is internal affairs, was invited to Paris conference. Al-Manfi’s team says holding elections is not logical until Libyan sovereignty and rule of law are restored, and it will be impossible to achieve this goal until mercenaries leave the country. Libya also does not have an election law while less than a month separates it from December 24 election. The Tobruk-based parliament passed an election law on October 4, but the next day Tripoli rejected it. During his Paris conference address, Dbeibeh urged the lawmakers to amend the election law for “justice, inclusion, and equal opportunities.

Ambiguity surrounding election results approval: Another challenge is approval of the vote results even if the election process concludes successfully. According to reports, al-Manfi will not run for president. Now there are three key candidates: Saif al-Islam Gaddafi, the son of the slain ruler, Haftar, and Khaled al-Mishri, the head of Council of State. Gaddafi registered on Sunday. The problem is that victory of each of these three can face rejection from a large body of opposition, something that can immerse the country into fresh chaos.

Continuation of foreign intervention: Another issue is post-election foreign interference. Even Paris conference demonstrated this reality as leaders and officials of 30 countries made decisions regarding Libyan future. Turkey and Russia are two key foreign actors that deployed large numbers of mercenaries to Libya to fight on opposite fronts. Still, Turkey did not take part in the conference. Additionally, the UAE, Egypt, Saudi Arabia, and France consider for themselves a role in Libya’s political future and, not surprisingly, disputes will continue among these actors after the election. In other words, victory of either side will trigger opposition and intervention of these countries.