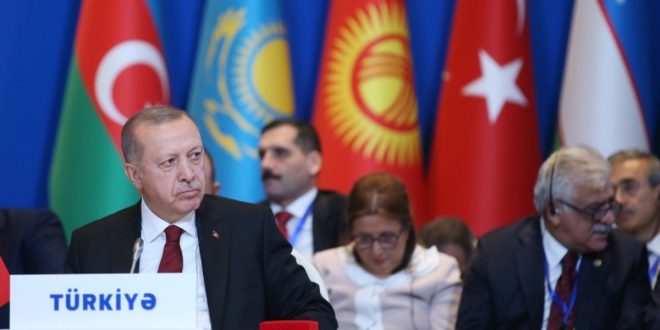 Alwaght- Foreign Ministers of Turkic Council states held their 8th summit in Istanbul on Friday. They coordinated the draft agenda and the final documents to be approved and signed at the next summit of the leaders.

The formation of regional and even international organizations based on common cultural characteristics, especially language, has a long history. Arab League, the Latin American and Caribbean Economic System (SELA) or even the Organization of the Islamic Cooperation (OIC), and many others are based on common cultural characteristics. However, compared to the other organizations mentioned, the Council of Turkic States (CTS) is not very old. But despite the short lifetime of the body, in recent years, Turkey in particular has sought to rapidly increase the level of relations between the member states. The goals of the council, and in particular Turkey’s motives for its strong presence, are important to shed light on.

Course of cooperation from foundation to date

The idea to establish a council of Turkic-speaking countries was raised in Nakhchivan in 2009 by Kazakhstan President Nursultan Nazarbayev during meeting of leaders of Turkey, Azerbaijan, Kazakhstan, and Kyrgyzstan. In October 2010, they signed the treaty for foundation of the organization during the 10th meeting in Istanbul.

The Turkic Council is the first politico-economic bloc to start its activities as a purely Turkic body. At the second meeting in Kyrgyzstan, the four countries agreed on a joint flag, an academy, and a joint historical and cultural legacy organization. The secretariat of the council is located in Istanbul. Uzbekistan joined the bloc in September 2019. At the latest meeting, Turkmenistan took part as a observer state.

Goals of the council

There are two major goals:

Boosting identity and political unity among member states: As its name points, being Turkic is the main reason behind foundation of the organization. So, the most important reason is bolstering the identity unity and hence the political alliance of the member countries. For example, at the 6th summit in 2018, the draft theory of convergence of Turkic states was signed.

Language and cultural commonalities are essentially an important factor in linking countries together and increasing the level of cooperation. It is noteworthy that all the member states, excluding Kyrgyzstan, with a common lingual ecosystem and Latin-script alphabet have a greater opportunity for deep cooperation in information technology. As experience shows, cultural-lingual environment can play a bigger role than economic, military, economic, and religious drivers in regional alliances.

Expanding economic cooperation: The member states have a special program to increase bilateral and multilateral economic ties. The fact is that along with significance of identity and political aspects, economic partnership is an important factor in strengthening a regional alliance or organization. After 2009, the Turkic Council has also paid serious attention to economic cooperation. In late 2010, the Council’s Secretary-General Halil Akinci spoke of forming a customs union. In 2012, finance ministers discussed a “development foundation” meant to increase investment in the member states. Ramil Gasanov, the head of the Parliamentary Assembly of Turkic Speaking Countries, (TURKPA) said the bloc seriously pursued a free trade union linking the members. A free trade union drops customs tariffs and unifies trade rules in the Turkic states.

At the latest summit, the participants agreed foundation of a investment fund in Kyrgyzstan capital, Bishkek. Also Kazakhstan unveiled “TURANSEZ special economic zone”, to be established in the city of Turkistan, the spiritual capital of the Turkic world.

The potential for economic cooperation between Turkish-speaking countries is high. The trade volume of member countries in the global economy is $536 billion. Turkey, with a population of about 150 million, an area of more than 4.5 million square kilometers, and a GDP of about $1.5 trillion, is world’s 13th largest economy. In 2019, the turnover of the member states of the Turkish Council reached about $9 billion with membership of Uzbekistan and Turkmenistan.

The main driving force behind Ankara push for Turkic Council boost is deepening Turkey’s influence in Central Asia. After 2011, and especially since the failed coup attempt on July 15, 2016, Erdogan has pursued a policy of avoiding reliance on the West and defining areas of ​​strategic interests for Ankara in various parts of the world.  Beside West Asia, the Mediterranean, and North Africa, he has pursued a policy of deepening influence in Central Asia for more than a decade. This approach was designed by former Foreign Minister and Prime Minister Ahmet Davutoglu who after 2006 was the main architect of the Turkish foreign policy.

In the new situation, Erdogan has substantial geopolitical tensions with major powers, including the US and European actors. This has led the Turkish leaders to try to use all available means to deepen their sphere of power. Although the element of religion has been Erdogan’s most important and practical tool for public mobilization inside and outside Turkey, he has also focused on the factor of language and race in order to achieve his ambitious goals. Now he is using the Turkic identity to get the member states on board his policies and agenda. This will help him broaden Ankara’s influence in strategic Central Asia.

While Turkey is in tensions with the US, in 2018 and at the meeting of the council, Erdogan called on the member states to use local currencies and drop the US dollar from their trade in an effort to deal an economic blow to Washington. In fact, Erdogan is trying to significantly expand Turkey’s interests and depth of influence in Central Asia, and the most important instrument available to him is the Turkic Council. In other words, Turkey’s ultimate goal is recognition as a big brother to bloc’s states to put the council in the path of pursuit of Turkish regional interests.

Despite the Turkish interests, the challenges should not be forgotten. Turkey has the lowest position in the foreign policy priorities of Central Asian countries. Although Ankara was one of the first countries to recognize the sovereignty of the post-Soviet countries, the newly independent states were afraid of getting rid of the Soviet Union and joining another ideological alliance. At the first meeting, they totally rejected a initiative in 1998 by Turkey’s President Suleyman Demirel to establish a body of coordination for Turkic states. Things went highly complicated shortly later when Turkey backed Uzbekistan opposition groups and Tashkent’s grew concerned about Turkish interests and presence boost in the region. Then came a period of standstill in the relations of the members. This failure and frustration gave a change to the Turkish political approaches to Central Asia.