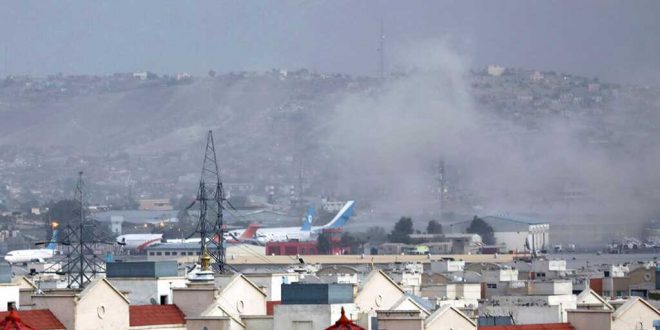 Officials told Fox News that those killed included 11 Marines and a Navy medic. Meanwhile there are dozens of Americans wounded in the suicide attack, and officials had earlier said that the death toll was likely to rise.

The suicide bomb attack set off a firefight at the gate, where the night before there had been were 5,000 Afghans and potentially some Americans seeking access to the airport to flee. Crowds had gathered for days seeking to escape the country, and there had been multiple warnings of a terror threat to the area – particularly from the Wahhabi Daesh [Arabic acronym for “ISIS” / “ISIL”].

The Pentagon confirmed the initial explosion as well as a second explosion at the Baron Hotel, where Americans have gathered in the past for rescue and evacuation. Secretary of State Antony Blinken on Wednesday had said that up to 1,500 Americans may still be in the country.

The Pentagon later said “a number of US service members were killed in today’s complex attack at Kabul airport.”

“A number of others are being treated for wounds,” Pentagon press secretary John Kirby said in a statement. “We also know that a number of Afghans fell victim to this heinous attack.”

It was not clear the extent of the injuries suffered by the troops, and how many others were hurt in the large crowds that regularly gathered at the airport seeking to flee the Taliban.

The Taliban had moved quickly through the country ahead of the planned US withdrawal at the end of the month, catching the US off guard and leading to chaotic scenes at Kabul airport and a mass evacuation effort. As of Wednesday, 82,300 people had been flown out, including 4,500 US citizens.

There are currently 5,200 US troops at the airport and thousands of Afghan evacuees still on the tarmac waiting to be evacuated. US planes have been leaving every 40 minutes out of the airport.

A source briefed on the situation told Fox News that there are hundreds of Daesh militants in the vicinity and warned that attacks are “likely to continue.”

“Taliban has essentially completely stopped letting Afghans through,” the source said, adding that they are “mostly” letting Americans through, but many are staying away due to the Daesh threat.

“Military continues to retrograde and depart airport. Almost a certainty that Americans will be left behind,” the source said. “They will have to be extracted after-the-fact through either Taliban negotiation or unconventional means.”

President Biden had faced significant pressure, both at home and from international allies, to delay the withdrawal date, but has so far pledged to stick to that timeline. Sen. Lindsey Graham, R-S.C., urged the administration to reestablish a presence at Bagram airport and continue the evacuation there.

“I urge the Biden Administration to reestablish our presence in Bagram as an alternative to the Kabul airport so that we do not leave our fellow citizens and thousands of Afghan allies behind,” he tweeted. “It is not a capability problem, but a problem of will.”

The bombing comes hours after the State Department warned Americans outside the gates of the Kabul airport to “leave immediately” due to the increasing terrorist threat. Blinken had said Wednesday there was a “very real possibility” of an attack.

In an alert on Thursday, the State Department confirmed a large explosion and reports of gunfire and said: “US citizens should avoid traveling to the airport and avoid airport gates at this time.”